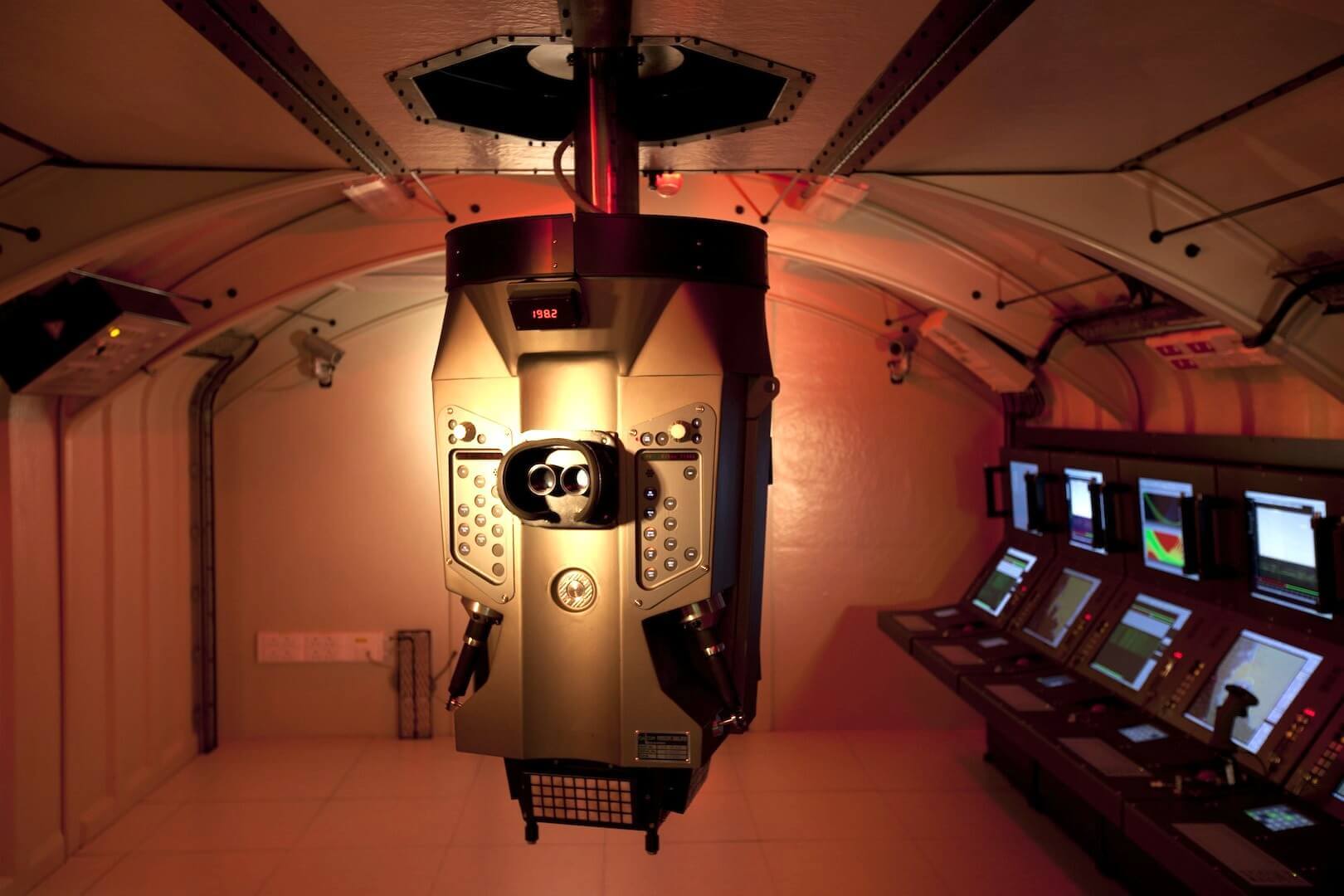 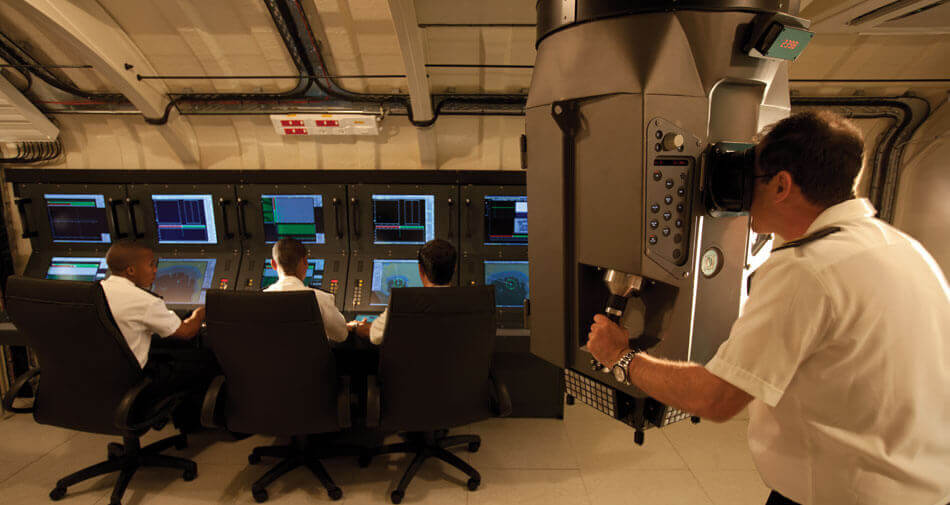 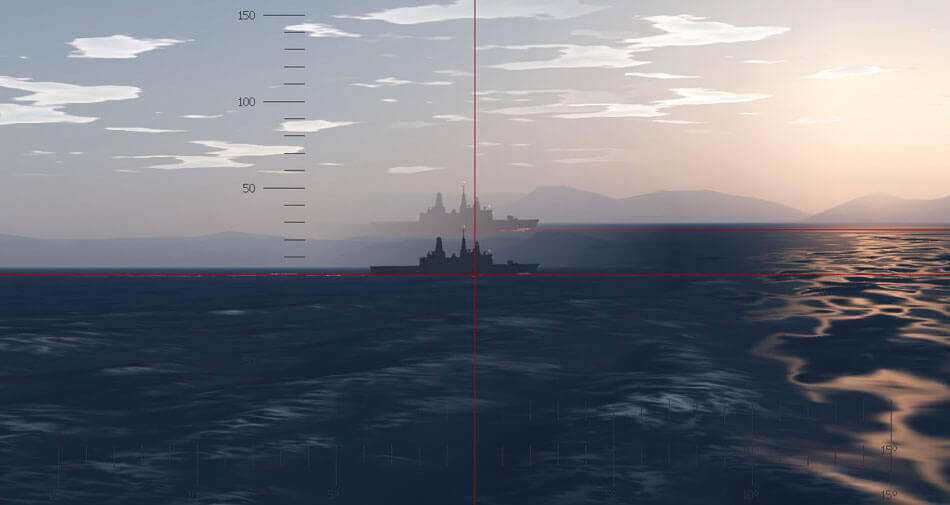 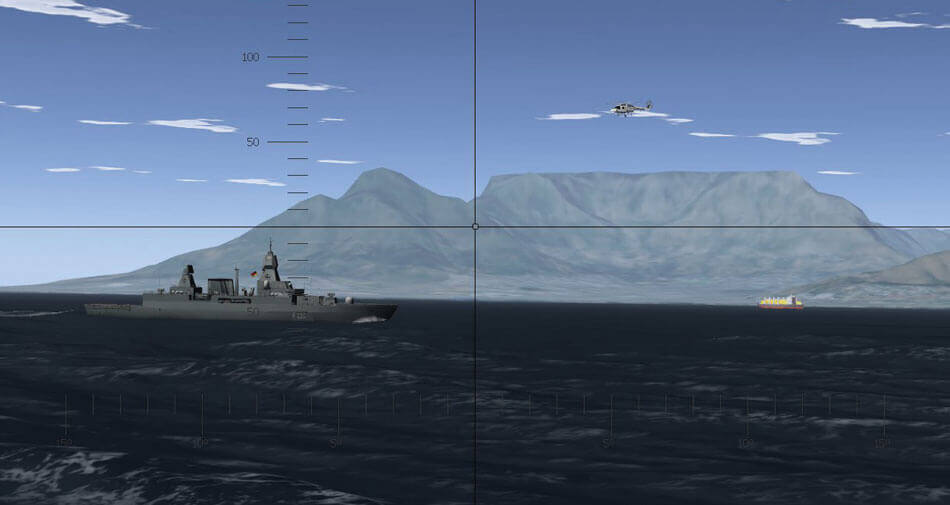 The Periscope Simulator (PSIM) has been developed in conjunction with the South African Navy (SAN) to provide a training facility to simulate the Zeiss SERO 400 Attack Periscope found on board the SAN 209 Class Submarines.

The PSIM consist of various electrically and hydraulically activated mechanical components and custom developed software modules. The mechanical components consists of the Ocular Box (Periscope) including motor drive and hydraulics, Hoistable Mast Panel (HMP) and Control and Display Unit (CDU). These have been designed to replicate the look and feel of the real equipment on board the submarine.

The training functionality, simulation of the periscope optics and control of the PSIM is made possible by the software modules PSIM Control, PSIM IWS and PSIM IG.

This software module manages the interfaces between the software and hardware components of PSIM, which consists of the following:

The PSIM Instructor Workstation (IWS) provides the instructor with an intuitive, user friendly graphical HMI. The IWS allows the instructor to perform the following training and administration functions:

The PSIM Image Generator (IG) is responsible for rendering the graphical images seen by the operator when he looks through the eyepiece of the periscope. The graphical display includes the rendition of the terrain, sky, clouds, ocean, sea targets, air targets, environment, weather and visibility. The image generation also depicts the sea states, wind direction, time of day, moon phases and angle of the sun. The parameters are configurable and set by the instructor via the PSIM IWS module.

The IG also responds to commands from periscope operator entered via the periscope's control panels and hand grips. These include rotation, elevation, magnification, selection of various optical filters, etc. The resultinggraphical effects are rendered in real time in the operators eyepiece display.

All the software was designed to run on COTS PC hardware including the PSIM IG which makes use of the highly sophisticated Pregasis Vega Prime suite of graphics libraries and simulation algorithms to achieve the best real world feel possible on a PC.